We Are Using Sports Development to Engage Youths in Oyo – Makinde

Oyo State Governor, ‘Seyi Makinde, on Saturday, said that his administration is developing sports to productively engage  youths in the State.

The Governor stated this at the presentation of awards and certificates to the winners of  the Oyo State 2021 Junior Golf Competition, to conclude a weeklong Golf Clinic organised for kids and teenagers by the Oyo State Ministry of Youth and Sports.

A statement by the Chief Press Secretary to the Governor, Mr. Taiwo Adisa, indicated that the Governor, while speaking at the Ibadan Golf Club, Ibadan, venue of the event, noted that the State has been creating platforms for youths to channel their energies to sports.

Governor Makinde also used the occasion to celebrate the achievement of the State, which placed 6th on the medal table of the just concluded National Sports Festival (Edo 2020) with 103 medals, commending the State’s athletes.

He equally charged the Sports Ministry to ensure that the contingent comes back with 100 Gold medals in the 2022 Festival slated for Delta State.

According to him, the State will put everything in place to further develop sports, adding that his administration has embarked on the upgrade of sporting facilities across the State in order to attract talents and to ensure that there is a programme for every child, even those who could not afford golf kits.

He added that the  administration will not relent in repositioning the development of sports in the State.

He said: “Sports development is a way that we think we can engage the youths in Oyo State and that is why we are doing everything possible to  ensure that our sporting facilities are upgraded and will attract talents to those facilities.

“Already, we can see the return on the investments we have made in sports.

“The Commissioner for Youth and Sports said that at the Nation Sports Festival, Edo 2020, Oyo State won 31 gold medals. We are just one gold medal behind Lagos, which used to be the leader in Nigeria, with Delta, Edo, Bayelsa and Rivers now ahead.

“What I noticed was that Bayelsa won a lot of medals in swimming and I called the contractor handling Adamasingba yesterday (Friday) and I said to him that he must hasten and give us an Olympic-size swimming pool at Adamasingba.

“So, Oyo State will compete favorably in swimming in the next National Sports Festival.

“Yes, we have made some improvements. In the last sports festival held in 2016, we were number 8. In this one (2020) we came out number 6. We won 18 gold medals in the previous one and in this one, we won 31. So, our target for the next sports festival is a minimum of 100 gold medals and that is going to happen within the tenure of this administration.”

Speaking on the just-concluded maiden edition of the Junior Golf Clinic, which is a brain child of Tobi Oyewumi, the Special Assistant to the Governor on Sports Development, the Governor said: “The SSG said all the children that came for the Golf Clinic are well-fed and I said yes, because Golf is an elitist game. But we want to have a programme for some of the children that won’t be able to afford golf clubs.

“So, this clinic is good and I won’t ask too many questions right now. But I want to say that this clinic will be a yearly affair and I look forward to seeing you next year. There will be a qualification and 30 per cent of the slots for the subsequent ones would be reserved for the disadvantaged children. We will ensure that the quota is filled, even if it means that we have to buy golf clubs for them, we will do that.

“So, I want to congratulate winners and some of you that did not win. Next year, make sure you train harder and come to the court when you have the opportunity.”

Earlier, the Commissioner for Youths and Sports, Mr. Seun Fakorede, appreciated the Governor for supporting sports activities in the State.

According to him, “I am very happy to see this come to fruition and it has happened in a grand way. I must also salute our brother, Mr Tobi Oyewumi; from the beginning of the maiden edition of this programme to the end, it has been a hitch-free one.

“I also want to appreciate the Governor for the wonderful support he is giving to the youths in the State, especially along the line of sports development. Never in the history of the State has it ever been like this. It is really a great one for us and we are privileged that, in our time, we have a Governor who is responsible and responsive.

“In addition to the on-going renovation of Lekan Salami Sport Complex, we have at least six stadia in the State, one in each geopolitical zone. This has never happened before. We believe in grassroots sport development and we look forward to seeing our young ones grow beautifully.”

Similarly, the brain behind the Golf Clinic, Mr. Oyewumi, appreciated the Governor for believing in sports development.

“Your Excellency, I want to say a big thank you sir, because you believe in this idea. Your believing in this idea is the reason you have given us,  youths, this platform in the Government of Oyo State.

He admonished the parents to encourage their wards to develop interest in sports and inculcate the spirit of sportsmanship in them. 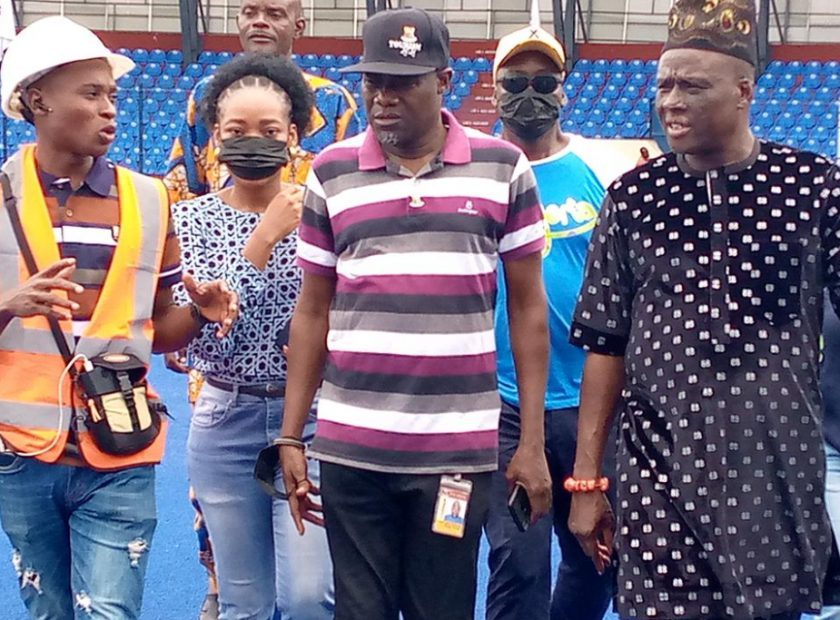