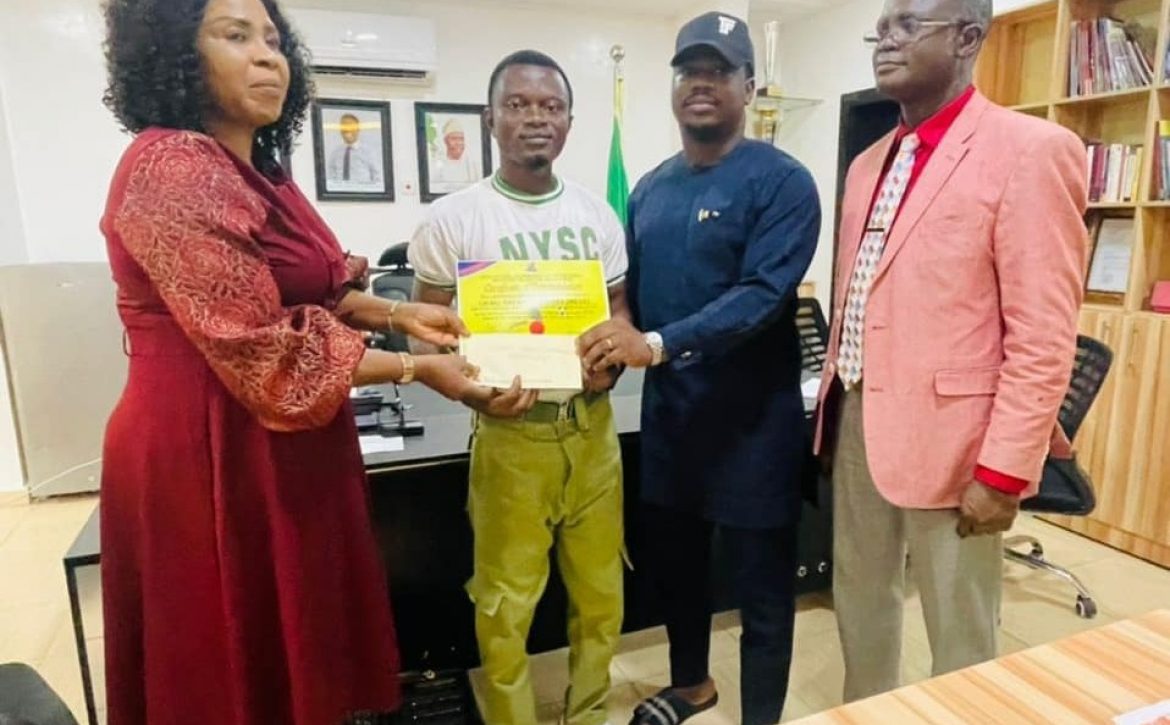 The Oyo State Ministry of Youths and Sports has presented Certificates and gifts to two National Youth Service Corps members, for distinguishing themselves during their service year.

Commissioner for Youth and Sports, Seun Fakorede stated this today in his office, adding that the Oyo State Government is more determined to make the welfare of serving corp members paramount.

Speaking in his office, he said the corps members, Yaya Omolara and Ugwu Sarah (Batch B, Year 2020), exhibited good traits of leadership, during their service year.

Fakorede advised the awardees to be good ambassadors of the State, the country and the scheme.

He said: “We found you outstanding for not just being role models to your colleagues, but for other youths in the State”.

Appreciating them for their contributions during their service, he said, “We are very grateful to you for your contribution to the development of the State.”

In her separate remarks, the State Coordinator for the National Youth Service Corps, Mrs. Ogbuogebe Grace appreciated the State Government and Ministry of Youths for giving them a good platform to excel and also maximize their potentials.

Also speaking, the Permanent Secretary, Ministry of Youth and Sports, Mr. Oludele Oyadeyi commended the awardees for showing good manners in their comportment, dresssing and discharge of their assigned duties.

Oyo State Commissioner for Youth and Sports, Asiwaju Seun Fakorede has stated that the present administration would do everything possible to provide basic amenities, welfare and facilities for the promotion of sporting activities and progress of youths in the State.

While appreciating  Tawakalitu for representing the State well at the tournament, Fakorede also appreciated her coaches who he described as a power house that were behind her success as she won two gold and one silver medals.

Asiwaju Seun Fakorede noted that it has become a norm, especially since the present administration in Oyo State to recognize and celebrate its outstanding athletes publicly, so as to serve as motivation and inspiration to others.

“For you to have achieved so much in just one tournament, it shows that there are more achievements waiting for you and I use this moment to assure Miss Tawakalitu Yekeen here and other youths that are making us proud in the field of sports and other areas in this State that we got your back.

“The present administration in Oyo State will not relent in supporting people that will bring sporting glories to the State, facilities are already being turned around to make training and preparations for athletes to succeed,” he assured.

Earlier in his welcome address, the Permanent Secretary, Ministry of Youths and Sports, Mr. Oludele Oyadeyi commended Tawakalitu for making the State proud, charging other youths to emulate her hard work.

While giving the votes of thanks, the General Manager, Oyo State Sports Council, Mr. Gboyega Makinde appreciated the State Government under the leadership of Governor Seyi Makinde for the support the sector was getting from the Governor.

He assured that more Nigerian youths in sports were still being discovered and Government would not fail in discovering them for national and international competitions.

In her response, Tawakalitu thanked those who have contributed to her achievement, most especially her mother who has been her backbone and hero.

Some of those at the event are the Chairman, Oyo State Sport Council, Honourable Gbenga Oyewusi, Special Adviser to Governor Seyi Makinde on Sports, Honourable Tobi Oyewusi, Director Sport Administration, Mrs. Olubisi Adegoke, Mr Kehinde Ojelowo and other directors from the Ministry.